Verse #6: Joshua 1:8 (How to Be Prosperous and Successful) 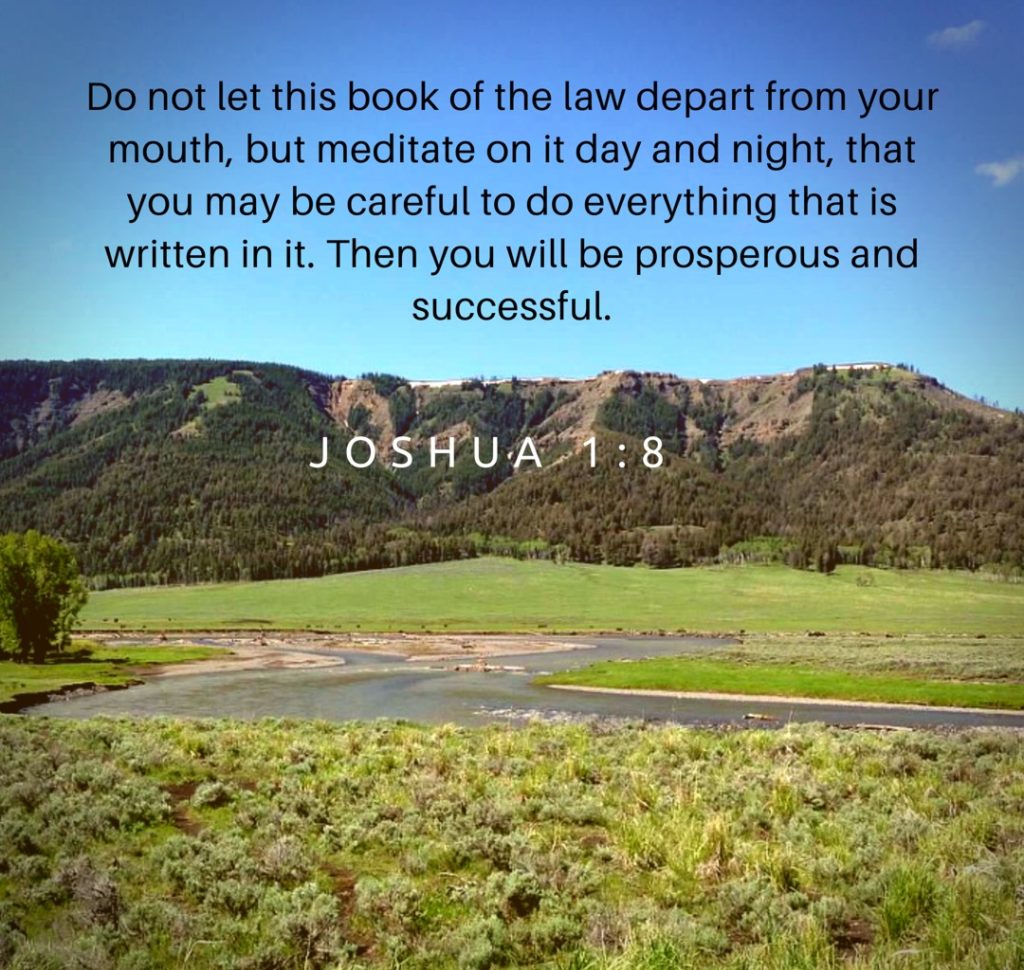 Do you remember what was your favorite game to play on the blacktop at recess? Mine was follow the leader. I thought it was all kinds of fun to see where the leader would take us.  Would we all follow in a straight line, circling the perimeter of the playground, or would we weave in and out of obstacles at a breakneck pace, challenging ourselves to keep up with the group?

None of that concerned me.  The whole reason I played the game was so I could gain the leader’s nod of approval at the end – for following directions and staying safely with the pack.

By the time Joshua becomes Moses’ successor, God’s people had spent 40 years wandering around in the wilderness.  Their disobedience and grumbling at the route they were walking only served to make the journey longer.  Even the 4th grade boy who leads his compatriots around in the grassy school lawn can get pretty put out with those who won’t willingly follow.

Moses was way past the put out stage.  The people he was leading were grumblers and complainers. They didn’t like the food and they didn’t like the leader.  So, Moses called them “rebels.”  That’s because they were rebellious. Against God. Which is not good.  At all.

God told Moses (the leader) to tell the people (the followers) that because of their grumbling (rebellion), one full generation of them would have to live and die before the rest of them could go into the promised land.

When I was selecting the verse from this whole book that Kynzie and I would memorize, I almost chose Joshua 1:9.  It’s a little more well-known.  Quoted more often.  It’s more familiar. But, the way I see it, verse 9 follows the lead of verse 8.  It was the message of Joshua 1:8 that I felt was the key to unlocking God’s promise to Joshua that he would be with him “whithersoever thou goest.”

With his mouth, Joshua was to speak the instructions on which he was meditating all day and all night. In that way, he would have the strength and wisdom and whatever else he needed to do everything that God called him to do. And if Joshua was obedient? If he was careful to do everything that was written in the book of the law, and depended on God for the strength to do it – what then?

Joshua would be prosperous.

Joshua would be successful.

Wow, talk about a half-time pep talk! Joshua heard God – and he heard him good. The next thing we know, Joshua is quarterbacking God’s people straight down the field to their greatest victory!  Out of his own confidence in the Lord, and out of his excitement at what God was about to do, Joshua motivated his team, giving them one more chance to get this follow the leader thing right.

“Sanctify yourselves: for tomorrow the Lord will do wonders among you,” Joshua said. (3:5)

“Hereby ye shall know that the living God is among you, and that he will without fail drive out from before you the Canaanites, and the Hittites, and the Hivites, and Perizzites, and Girgashites, and the Amorites, and the Jebusites. Behold, the ark of the covenant of the LORD OF ALL THE EARTH will pass over before you into Jordan,” Joshua declared. (3:10-11)

The people then decided (as we say in Texas) they would just go on ‘head and be a little more obedient this go ’round. When the Lord of all the earth caused the waters of the Jordan to be cut off right before their very eyes, the people went across on dry ground.  In fact, Joshua 4:10 says they “hasted” and passed over.

I guess that means they ran.

And then what happened?

“On that day the Lord magnified Joshua in the sight of all Israel; and they feared him, as they feared Moses, all the days of his life.”

O God, may we strive with everything in us to raise children and grandchildren who lead like Joshua! 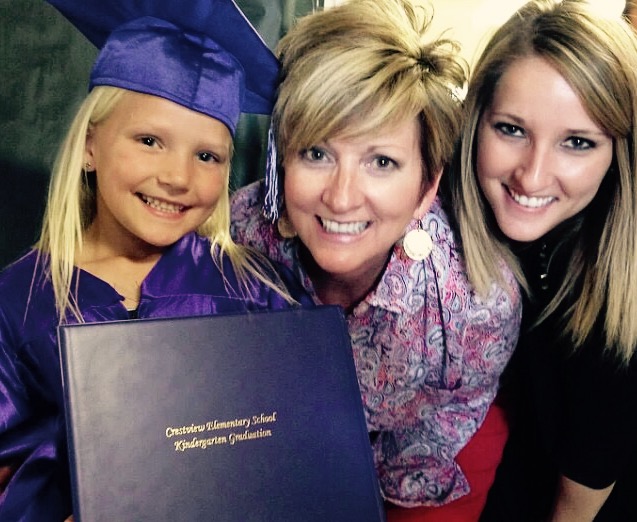 And lest we ourselves be like the grumblers and complainers who wandered in the wilderness, may we instead lead them to not let this book of the Law depart from their mouths! May we motivate them to meditate on it day and night, and may we forever coach them to carefully do everything that is written in it. So, that, like Joshua….

They will be prosperous.

They will be successful.

Encouraging intentional, obedient adventure – for a nod of approval from the One we follow,

PS – It was under Joshua’s leadership that the Israelites fought the battle of Jericho, Jericho, Jericho (sorry, had to do it!), and it was under his leadership that they conquered Canaan, the promised land. At his last address to the people, it was Joshua who said, “Choose for yourselves this day whom you will serve.  But as for me and my house, we will serve the Lord.”

Let your child or grandchild help you come up with hand motions as you play follow the leader, saying the verse as you march around the perimeter of the yard or park.  First you’re the leader.  Then it’s his turn. Use this as a time to talk about the importance of leading people well.  Tell the story of Joshua, or read it together from the Bible.  Help him see that God always rewards our obedience by telling a story from your own life.  Did God help you “cross a river on dry ground?” Tell him about it. Have fun visualizing the Israelites as they “hasted” over to the other side. 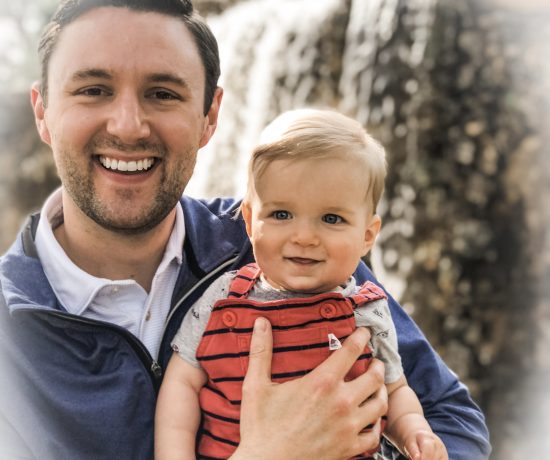 Father’s Day Gifts for the Dads in Your Life

10 Things to Do on a Hill Country Girls Weekend 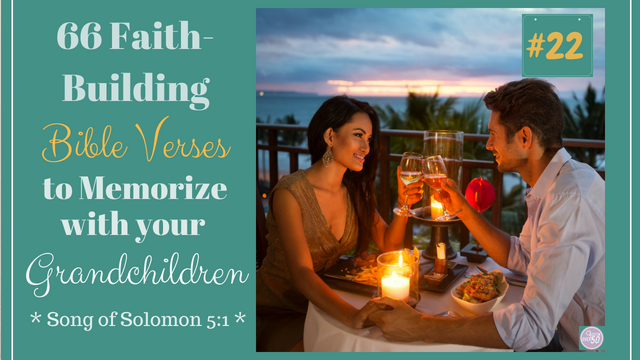 ADVENTURES IN NEIGHBORHOOD SLEUTHING 😎 I promi

When you talk your granddaughter into trying a tre

TEXANS TAKE NO FLOWER FOR GRANTED 🌸 Here in Te