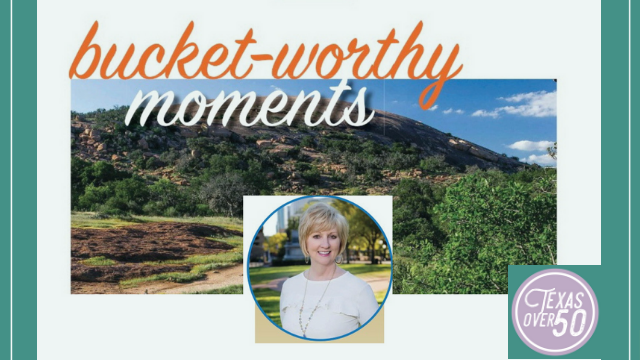 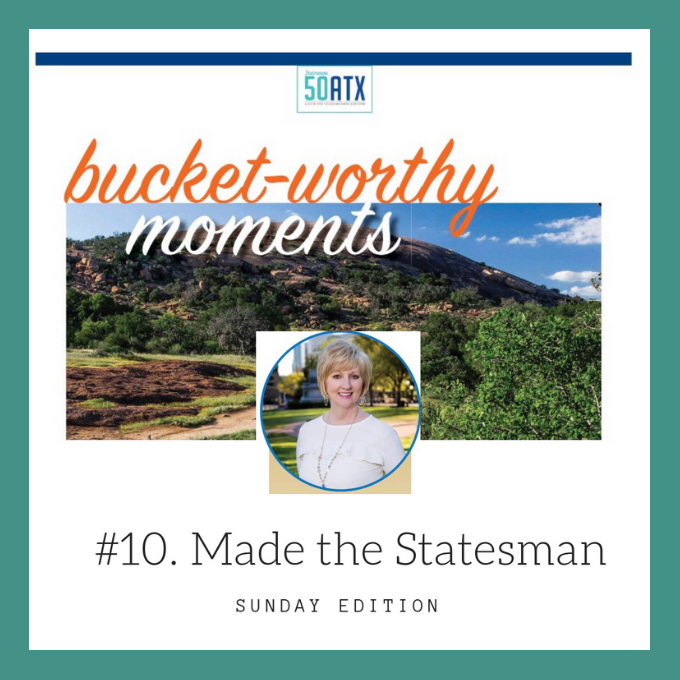 Actually, it’s not my first time to make the paper. Three of my classmates and I were featured in The Canyon News after we were elected as officers of our school’s Future Homemakers of America club. Another time, our whole family was pictured in the Muleshoe Journal as the town’s newest residents.

But, the Austin American Statesman is like, bigger. The circulation of this historic newspaper must be at least a million or more times more than the others that mentioned the very name of little ol’ me.

Yet, there I was, in the Sunday edition, no less. And on a full page, for crying out loud.

A writer had contacted me about her upcoming story in the paper’s special interest section for Austinites who’ve hit the Big 5-0. She had seen my blog, liked what I was writing about, and wondered if I would want to be quoted. If so, could she send me a few questions to answer. She also said that if – as in, not with any certainty – but IF you make the paper, it will be several weeks down the road, on October 21.

There was plenty of other stuff going on in our world about that time, so I didn’t think about it again until October 20. Hon, I remembered, we’ve got to get a newspaper in the morning before church. I might be in it – as in, LOL, HaHaHa, and fat chance – but let’s check it out anyway.

You know, when it comes to my kids, I’m constantly reminding them to think positive, expect miracles, and go for their goals. When it comes to myself, however, I tend to underestimate, expect less and check off smaller boxes.

Anyway, in the interest of who knows? and stranger things have happened, I woke up on Sunday morning, October 21 and sleepily said to the sweet man who married me, “Wanna go get a mocha and the Statesman?” To which he replied, with the sing-songy-voice of a boy who already saw what Santa left under the tree, I’ve alreaaaaddddyyyy foooooouuuunnnnnd it. He woke up before dawn and found the article right there in vivid digital color on the screen of his iPad.

Look, you even got a full page, he said with such pride. I couldn’t believe it. Immediately, I called the kids, texted screenshot images to friends, blasted it on Facebook, you know, all the things you do when something big happens. While I was kind of in shock to see my picture, I was so proud of the caption underneath: Local Blogger. But the very best part was that every reason why I write this blog was also there. Nothing left out. Nothing misquoted.

Those words were my very own.

Why I Write – It Was All There

I write to encourage Texans Over Fifty to create a lifetime of everyday intentional adventure. It keeps us expectant about the day. It motivates us to try new things, and it builds our community to know we’re in it together.

Whether it’s eating at a new restaurant, exploring the Texas hill country, planning a week with the grandkids or looking at faith in God as a big adventure in itself, these are the things I love to do myself and the things I want to inspire my peeps to do for themselves. Even the part about my greatest legacy, memorizing Scripture with my granddaughter, it was all there.

One of the first people I texted that morning was a dear friend back in Amarillo. She’s a big-time encourager herself. When I first started writing my blog, she said the sweetest things about it and ended with: You’re going to be in the Statesman one day! I guess she’s a little bit prophetic, too, because, well, I sure ’nuff was.

I made the Statesman, y’all.

Yep, that definitely merits a spot in this country bumpkin’s Top 10 Experiences of 2018.

PS: Click here to read the full article. Thank you to every single one of you who have encouraged me on this little blogging journey. I’m looking forward to lots more fun together in 2019! 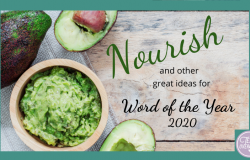 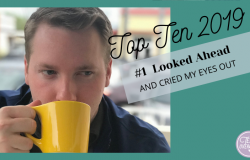 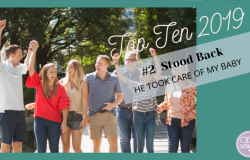 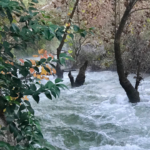 Hiking at The Violet Crown Trail 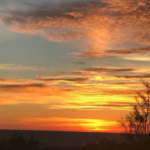