If you’re a wordie like I am, nothing captures your attention any quicker than a good play on an ordinary word. Take a common phrase and give it new meaning? Now, I’m really listening.

Such is the case with the four words that make up the brand of the world’s most inviting table.

Outstanding in the Field

Leave it to an artist like Jim Denevan to capture a culinary vision like this one. This is the kind of idea we all wish we could have been the first to have. However, as every regretful poetic line begins – Alas – it was not we, but he who had this brainstorm, and it was he who acted upon it. Since the first dinner in 1999, in the field of his farming brother, Denevan’s vision has caught on like a wild crop of organic okra, becoming the pinnacle event for foodies who have a passion for the experience as much as the taste.

I’m not at all sure how the name was decided for this amazing experience. Did a team of advertising professionals gather around a conference table and throw out ideas? Or was it more like an epiphany that came to its organizer in the dead of night? Whatever it was, it’s perfect. This isn’t your typical awards-type dinner where accomplished are lauded from a crowded stage. It’s a quiet, family-style dinner where humble people are recognized as Outstanding in the Field of their passion – organic farming.

There has to be a great team behind a successful business like Outstanding in the Field, and there simply can’t be too many cooks in the kitchen when it comes to a dinner of this size.

Though Jim Denevan was the chef for that first event, he’s now more like the showman of the culinary circus. He comes across as a very country-charismatic public relations guy who commands a willing audience wherever he goes. The moment Jim steps up onto a wooden vegetable crate, he’s thanking all the people who make it possible and working the crowd with his quick wit and engaging charm.

Denevan’s team includes the woman next to him who greeted all the guests at the entrance. These two seem to work together as naturally as salt and pepper. He throws out a line, she reels it in. He gives a detail about the success of the business, she thanks someone who makes it happen. At the end of every sentence, their glasses are raised and clinked together in great and public gratitude.

One of several urban farms in East Austin, Boggy Creek has grown over the years into a beautiful place with a thriving farm stand. The farm was the vision of a Larry and Carol Ann Butler, who started selling their produce to the public in 1991. This was the 11th occasion for an Outstanding in the Field dinner at Boggy Creek Farm. After Larry passed away a few months ago, daughter, Tracy, left her career as a dental hygienist. She wanted to come home and help keep the produce growing.

When guests arrive, they are greeted by apron-clad servers carrying trays filled with enticing hors d’oeurves. Have you ever tasted fried Channel catfish on a blue-corn tostada chip, topped with smoked tomato salsa and corn? No? Neither had I, and believe me, if I hadn’t been in such a swoon, I could have eaten my weight in those delightful little things.

Under the nearby tents, featured wines of the day are offered, alongside tall goblets of ice-cold water.

Surprisingly, ticket holders for today’s event have come from far and wide to this Austin dinner. For some, this was an item to check off the bucket list, and for others, it was something they had heard about strictly from pictures they had seen on the Facebook pages of their friends.

The table is the biggest draw for Outstanding in the Field. While it looks like it goes on for a country mile, there are actually only seats for about 200 people. Isn’t it incredible?

The traveling crew has set up incredible tables like this one in every single state, and now in over 16 countries. Check out more beautiful pics here on the website.

The long, long table is divided by the tucking of the tablecloth into smaller sections of seating for six. This gives the servers a manageable group to care for, and it also makes for more intimate conversation among the guests. As you can tell from this photo, there was absolutely no lull in the conversation anywhere.

As we sat across from and next to four people we had never laid eyes on before this day, I wondered what it would be like to live across the fence from Boggy Creek Farm and hear the voices of so many people making friends so very quickly. It must have sounded like a swarm of the sweetest buzzing bees.

All of the courses are served family-style at Outstanding in the Field dinners. Here’s how this lovely salad was described on the menu: Boggy Creek Farm arugula, frilly mustard greens, shishito peppers and basil flower vinaigrette with coal-roasted butternut squash. Let me just assure you, it was as delicious as it sounds. Who would ever think to spread a schmear of butternut squash around the bowl like that?

Drumroll please! The star of the menu has now appeared upon the table, my friends. Everyone ready your iPhones, because the pictures must memorialize this meat.

Once when Mike and I were on a weekend trip to Santa Fe, we enjoyed a Mexican rice pudding that was out.of.this.world. Always a fan of sweet rice, I’m thrilled to see something like this on a menu.

The chef for today has ramped up the recipe by topping his version of arroz con leche with whey caramel and honeycrisp apples from Top of Texas Orchards, and I’m not the only one who was trying to figure out how to lick the mason jar clean. Goodness. This was some delicious dessert.

With the first collective bite, all the voices died down, as if an air of reverance had settled upon us. I gently punched the arm of the guy from California on my right as he was partaking his last spoonful. With raised brows over my eyes of Texas-pride, I asked him a question that required no words. Hmmm? To which he responded in kind. No words, just big, demonstrative nods of his head and a satisfied moan. Hmmmmmm.

That’s right, my new Cali-friend. We do it up big in Texas, and we do it up right. There’s your proof, in this here rice pudding.

When it’s all said and done, the chef makes an appearance, and the crowd rises to applaud his efforts. For this 11th Austin occasion of Outstanding in the Field, the master in the mobile kitchen was Jesse Griffiths, from the critically acclaimed Dai Due.

Serving locally sourced food from Texas farmers and ranchers is the name of the Dai Due game (like that little play on words?). Here’s a link to the website for more info and lots of tantalizing photos.

If you’re wondering about the cost of tickets, I’ll tell you straight away – they’re pricey. However, if you have a special anniversary or big birthday coming up, this would be a worthy experience and worth the money you’ll spend to make it happen. Here’s a link to purchase tickets for the upcoming 2019 Winter Tour.

In our case, some very kind friends gifted us with their tickets when something unexpected changed their plans. We sat with friends-of-our-friends whom we had never met before, and we had the best time.

Having dinner in the field on a farm? Fantastic. Claiming two new friends when you leave? Definitely a big bonus.

As we followed the garden lights back to our cars parked under Boggy Creek Farms’ sheltering trees, I was overwhelmed with the magnitude of the experience we had just enjoyed. I was so grateful for the friends who allowed us to come in their place, so in awe of the creativity of the concept, and so inspired by the sheer hospitality of it all. Somehow I think that’s exactly what the creators of this event had in mind.

“From coast to coast, mountain to rooftop, sea cave to pier, in the valley, in the city, trekking the wilderness or looking down from a spectacular vantage, we always feel close to the people of the land, the guests at the table, and the meaning of what we do, because our heart is in the work.” – Jim Denevan, Outstanding in the Field

Encouraging intentional adventure, in a field, on a farm,

PS: Have you signed up to receive my weekly newsletter? It’s easy peazy, and you can do it right here at the popup! 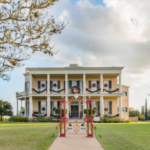 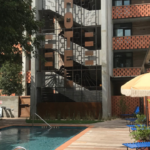