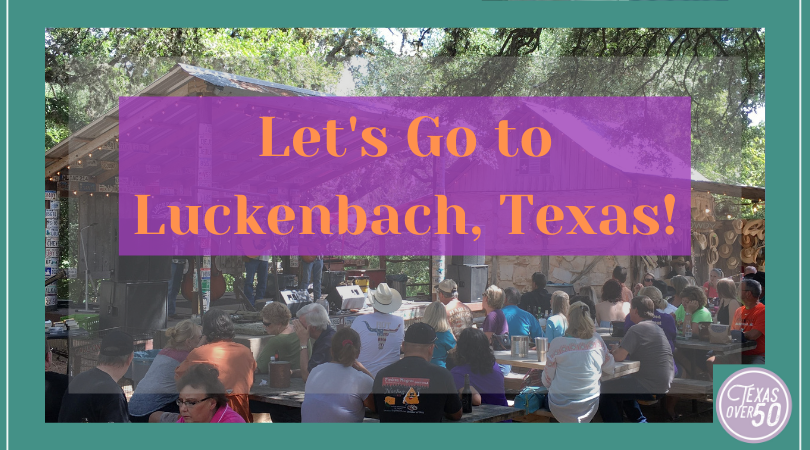 Most Texans can sing right along with Willie Nelson’s famous song that put this tiny Texas spot on the map. But a whole bunch of us really have no idea where it is, much less what we’ll find once we get there.

When we lived in Austin, one of the long-time locals asked if we wanted to see this Texas hole in the road for ourselves, and what did we say? You better believe it. Is the Pope Catholic? Do fish swim? Is Willie Nelson the king of country music? We were all in. 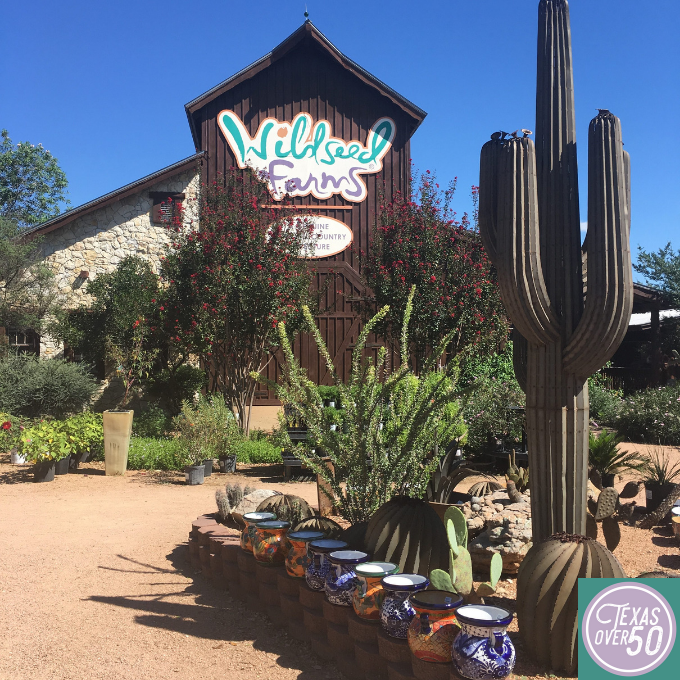 First, we paid a visit to Wildseed Farms in Fredericksburg, Texas.

Have you ever stopped belting out the words to this song and wondered, where IS Luckenbach, Texas?Me, too.

I’ll tell you in just a second, but first, let me remind all of us Over Fifty that when Willie Nelson cut this record back in 1977, there was no Google.

We might have asked our high school or junior high friends if they knew where in the heck was Luckenbach, but unless they were from the hill country, they probably didn’t have a walleyed clue.

Nobody’s parents were steering the station wagon around trying to find Luckenbach on vacation, either, because whatever Waylon and Willie were doing down there might not be appropriate for children. Getting back to the basics of love and all, you know.

Well, I was a grown up gal by the time we moved to Austin, and it was time.

Whatever we would find on a Sunday afternoon in Luckenbach, Texas, was probably something we could handle. We are among the mature here at Texas Over Fifty, are we not?

So, off we went. Friends in normal cars, nobody smokin’ nothing funky, just heading west on a little day trip adventure west of Austin. 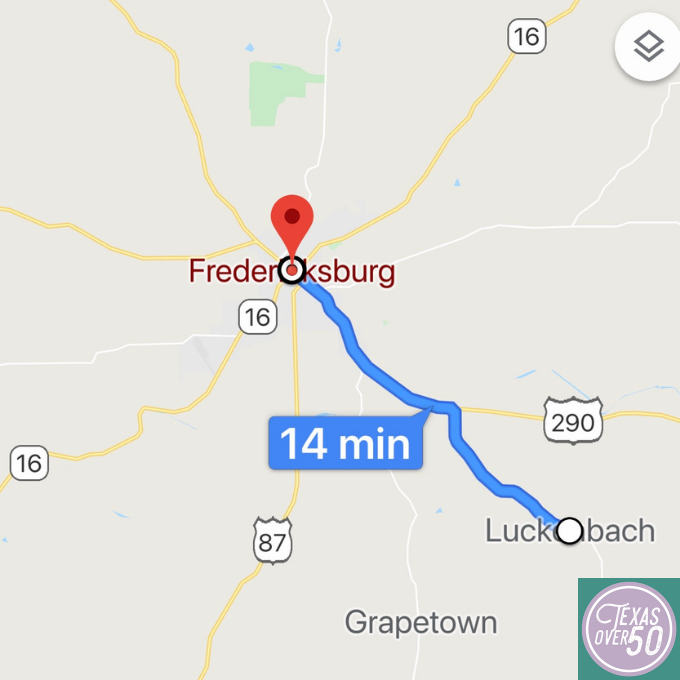 Luckenbach is located 10 miles southeast of Fredericksburg, the heart of the Texas hill country.

Luckenbach, Texas is exactly what you think of when someone says it’s just a little ol’ hole in the road.

Technically, it’s not even a town. Luckenbach, Texas is an unincorporated community, a “spot” on about nine acres of beautiful Texas land in southeastern Gillespie County, near Fredericksburg. Unincorporated – that just means that Luckenbach is a settlement that is not governed by any municipality. That means they make their own rules in Luckenbach.

That’s right. We can literally count the population of this famous Texas landmark on one hand.

Which adds all the more to the Texas-style draw of the place where Willie claims we need to go. 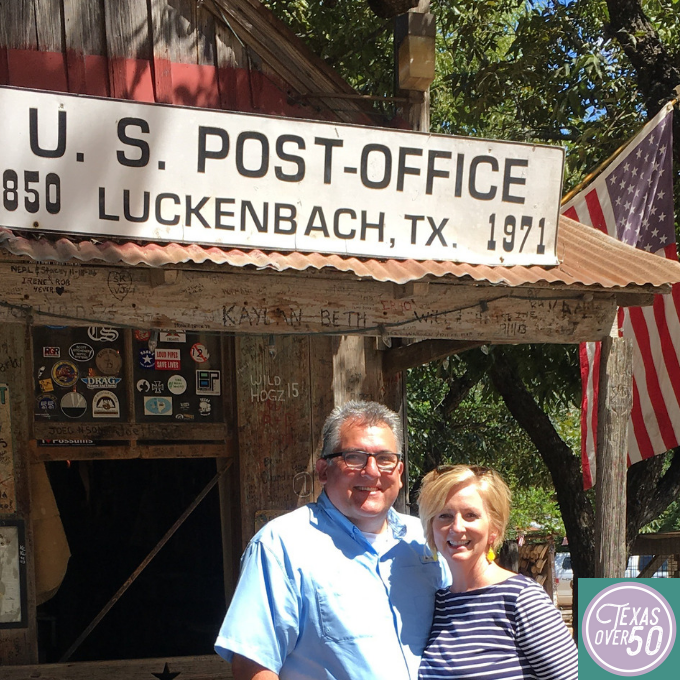 Bring your cards and letters to mail from Luckenbach.

Musicians love to play at Luckenbach.

Mike Blakely and his band strummed and sang for two hours like it was no time at all.  For a couple of songs, a guy with a harmonica appeared out of the trees and played with them, then off he went, maybe to a second gig.  (We’ve also learned that these local musicians might be part of 3 or 4 bands at a time.)

I know how hard it is for these guys to get this good at what they do.

My mom and step-dad once thought it would be fun to create a musical version of The Brady Bunch out of our blended family, so they gave me piano lessons while my brother and step-brother tried to learn guitar and banjo.

Of all things, they found a guy who would teach all three instruments in one long Wednesday afternoon session every week. He even offered a reduced rate, and he would actually drive to our house for my mom’s convenience.

Poor guy didn’t know what he had signed on for. We drove the teacher to drink. Literally. Mr. Whoever-He-Was kept his shiny little flask handy while he was at our house.

That’s one of my mom’s best stories, and I still love to hear it. 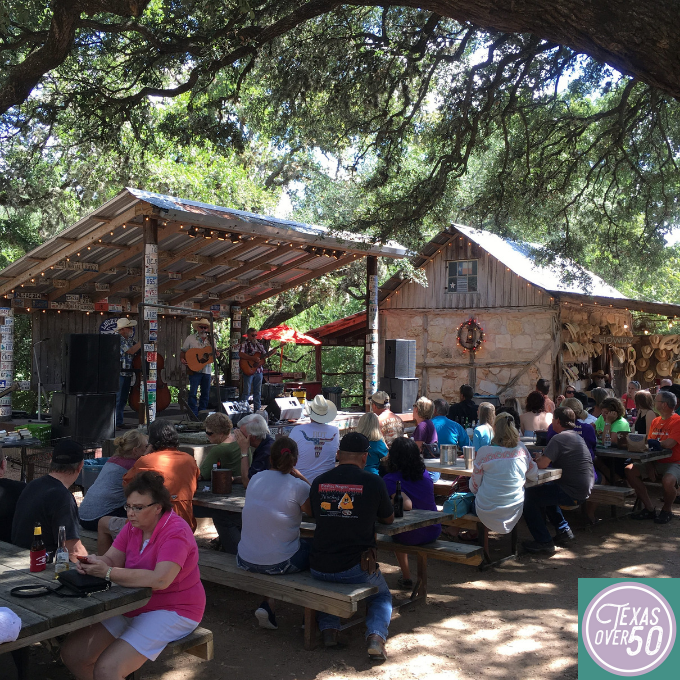 Local performers and occasional celebrities perform on stage at Luckenbach.

There’s a store and lots of Western hats.

These two friends left the guys under the trees and tried on hats for a while. There’s also a General Store with lots of vintage goodies and t-shirts, as well as some local handmade wares. 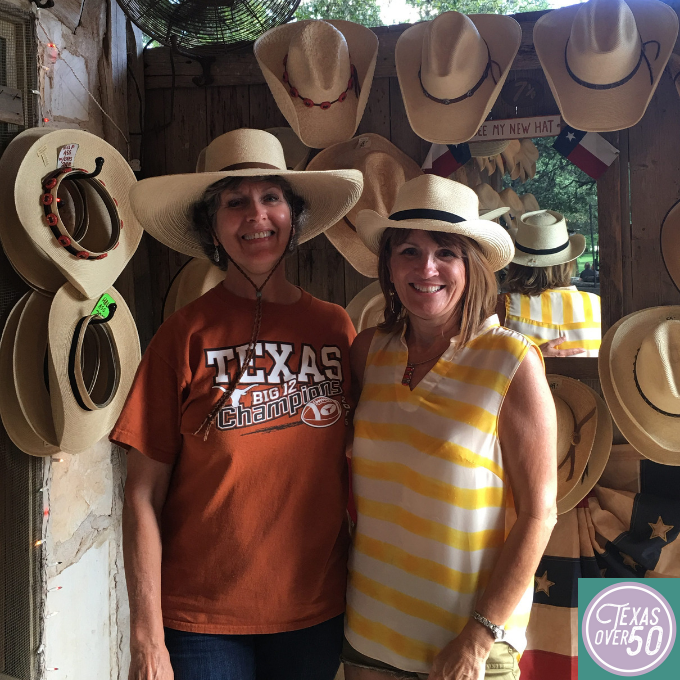 Luckenbach is a scenic spot.

The massive oaks at Luckenbach make this a great place to take memorable photos.

Check out this huge tree. There was room for all of us to stand at the trunk.

I’m not sure how old a tree has to be in order for the trunk to be this wide, but I’m pretty sure it’s at least twice as old as any of us in the pic. 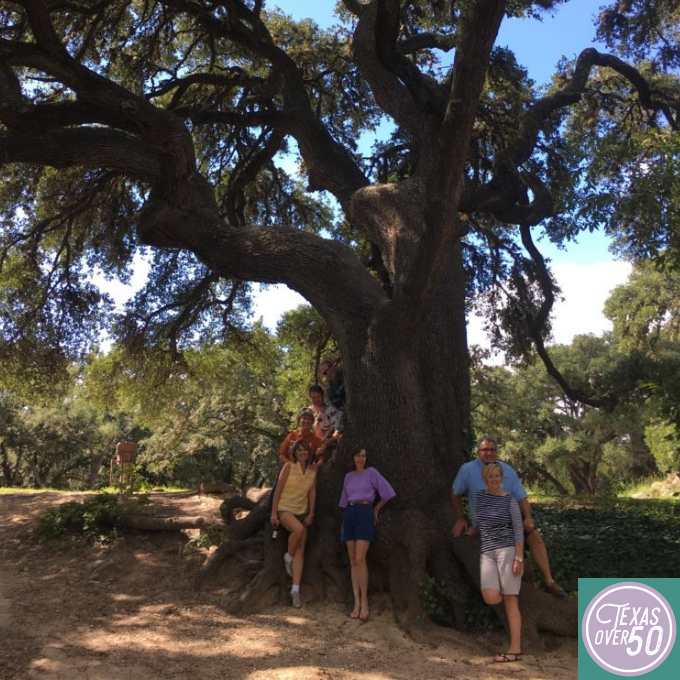 In 1904, the population of this small Texas spot had increased to almost 500 people, but 60 years later, it was down to only 3. In 1970, Luckenbach was purchased for $30,000 and later became a scenic place to enjoy music under the oak trees or do a bit of boot-scooting in the dance hall.

As one-day excursions go in the great state of Texas, I believe this to be one of the iconic best.

What was once a trading post to pioneer farmers is now described as a “Texas state of mind.”

The state of my mind improved drastically while we were there.

For a regular dose of what regulars love, subscribe to the settlement’s monthly newspaper, Luckenbach Moon, here. 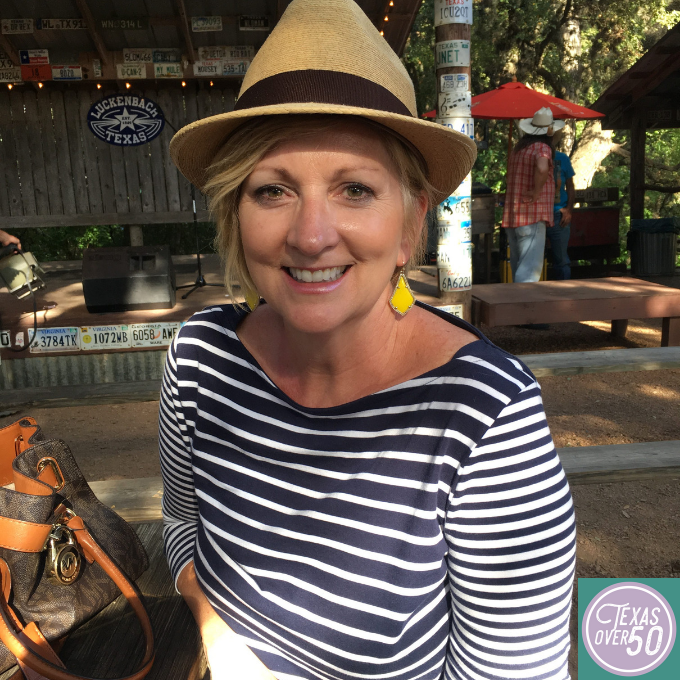 The song says it all.

After our day trip to Luckenbach, Texas, it was easy to see for ourselves how the words to the song fit the feel of the place. Ain’t nothin’ that’s not laid back and relaxed at Luckenbach.

While we didn’t see Willie or Waylon or any of the boys, I’m sure glad we’ve got this song and this place in Texas to claim as our own.

So baby, let’s sell your diamond ring,
Buy some boots and faded jeans and go away.
This coat and tie is choking me,
In your high society you cry all day.
We’ve been so busy keepin’ up with the Jones,
Four car garage and we’re still building on.
Maybe it’s time we got back to the basics of love.

Encouraging a life filled with everyday intentional adventure with a Texas state of mind,

Fredericksburg is Home to Orchards and Vineyards

A Sweet Stop at Collin Street Bakery in Waco

3 Restaurant Chains Worth the Money 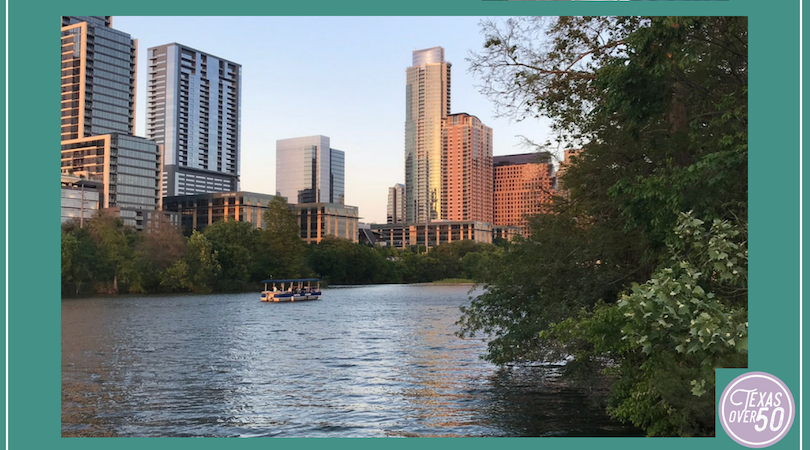 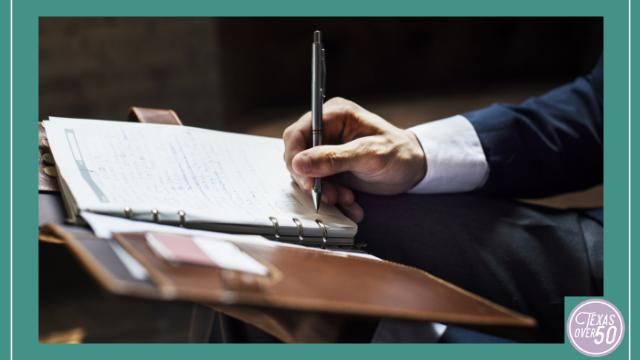 4 Perfect Planners for Men Who Have Plans 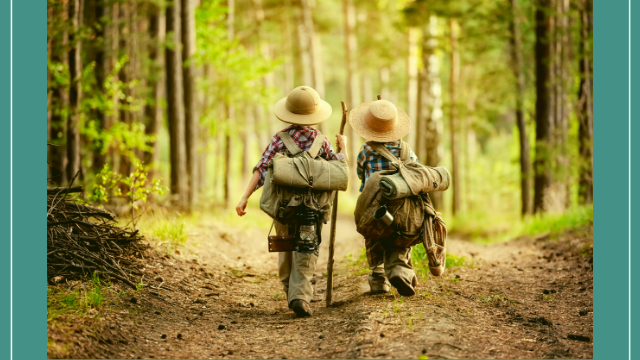 5 Easy Ways to Add More Adventure to Your Life