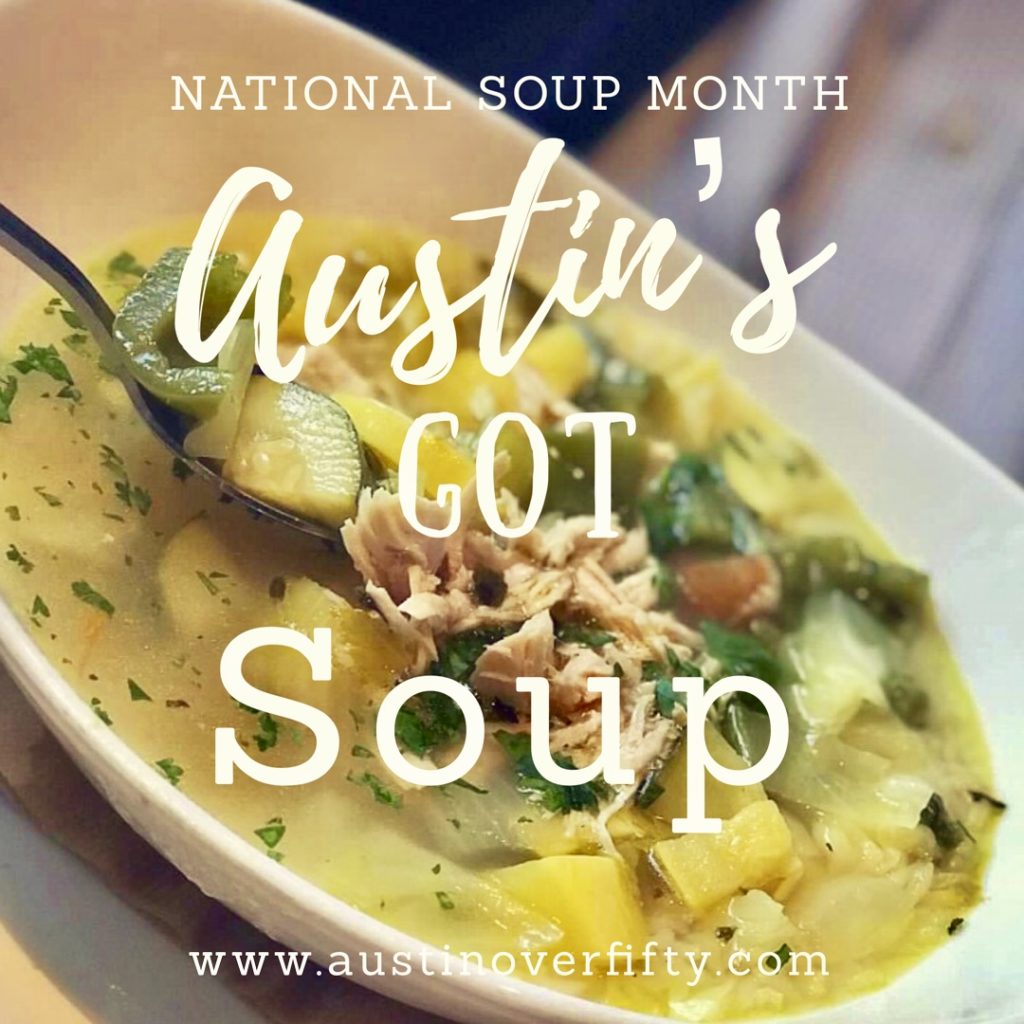 “Eating Soup. Thick soup served in a soup dish is eaten with the soup spoon. If you want to get the last bit of it, there is no impropriety in tipping the dish away from you in order to collect it at the edge. Indeed you are paying a subtle compliment to your hostess by this demonstrating how good it is. Drink thin soups and bouillons served in cups, as you would tea or coffee, but if there are vegetables or noodles left in the bottom, eat them with the spoon, rather than struggle unattractively to make them slide from the cup into your mouth.” (Eleanor Roosevelt’s Book of Common Sense Etiquette, 1962)

I really wish we were sitting across from each other at a sturdy wooden table and sipping soup.

I would ask you what were your favorite soups – first growing up – and then, now. We would discuss our grandmother’s thrifty potato soup recipes, our mother’s feed-an-army beef stews, and our own favorites from vacations hither and yon. Wouldn’t we?

Well, one thing’s for sure. After you read all about Austin’s soups, you’ll be texting a friend and making plans to try some of them, because, hey, it’s National Soup Month, and Austin’s got some seriously sublime soup!

With one location at the Domain and another downtown on West 6th, there’s no reason not to place Gloria’s on your soup crawl list. Don’t expect Mexican food at Gloria’s – but do get your palate ready for what they call Salvadorian style fine cuisine. Mmmmm. The chicken and rice soup, the black bean soup and the seafood soup are all just delicious. Served with chips and salsa, the $6.99 price point for a big bowl of this Latin yumminess is definitely an Austin restaurant bargain. 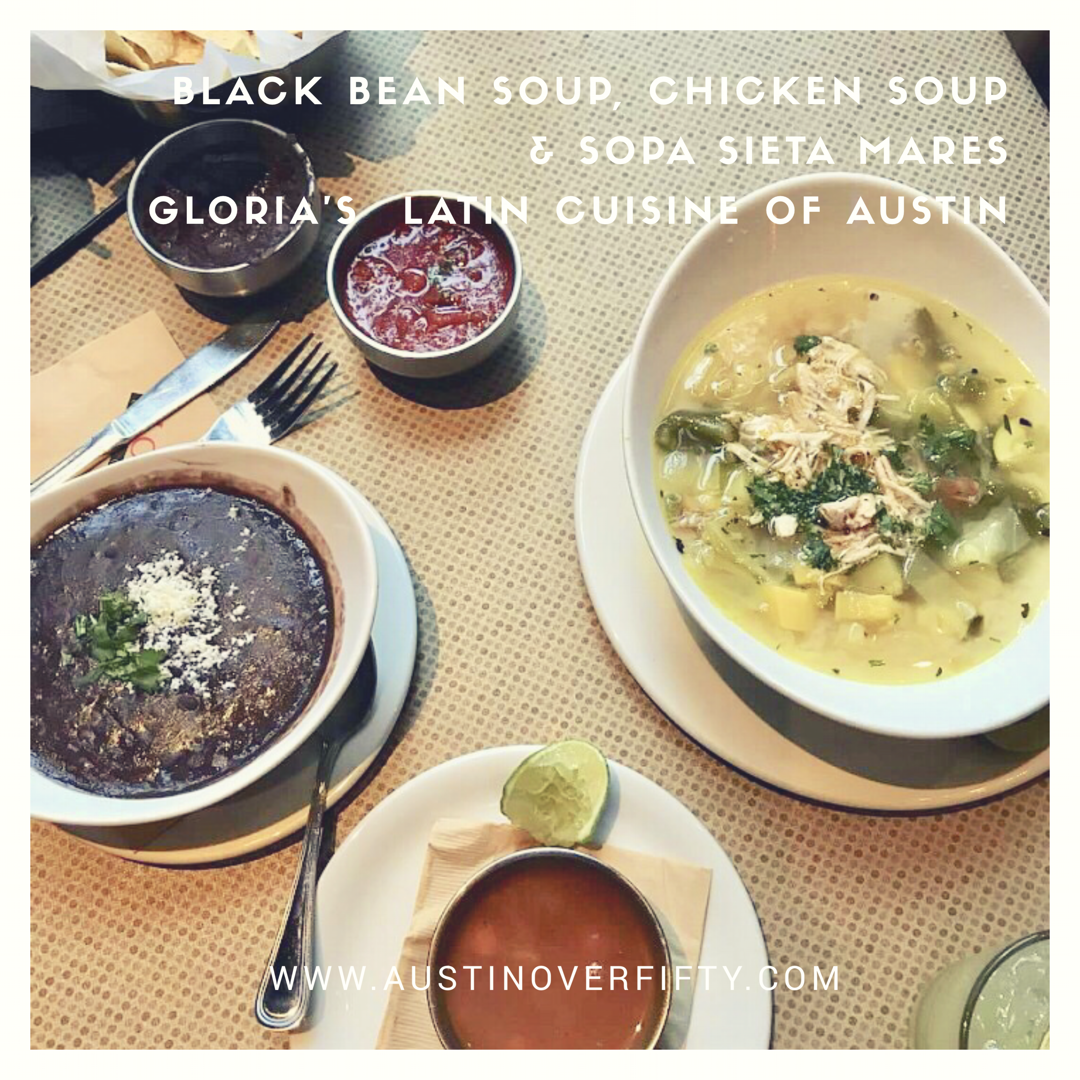 Since opening in 1984, Manuel’s has become an Austin staple, serving tourists and locals a mixture of artfully prepared regional Mexican cuisine and familiar favorites alike. Manuel’s second location at the Arboretum area caters to neighborhood families and north Austin visitors with the same great food. Try a bowl of Manuel’s distinctly different creamy chicken tortilla soup with a side of fresh guacamole this weekend while we’re enjoying this cold Austin weather and you’ll make a wintry memory for sure. 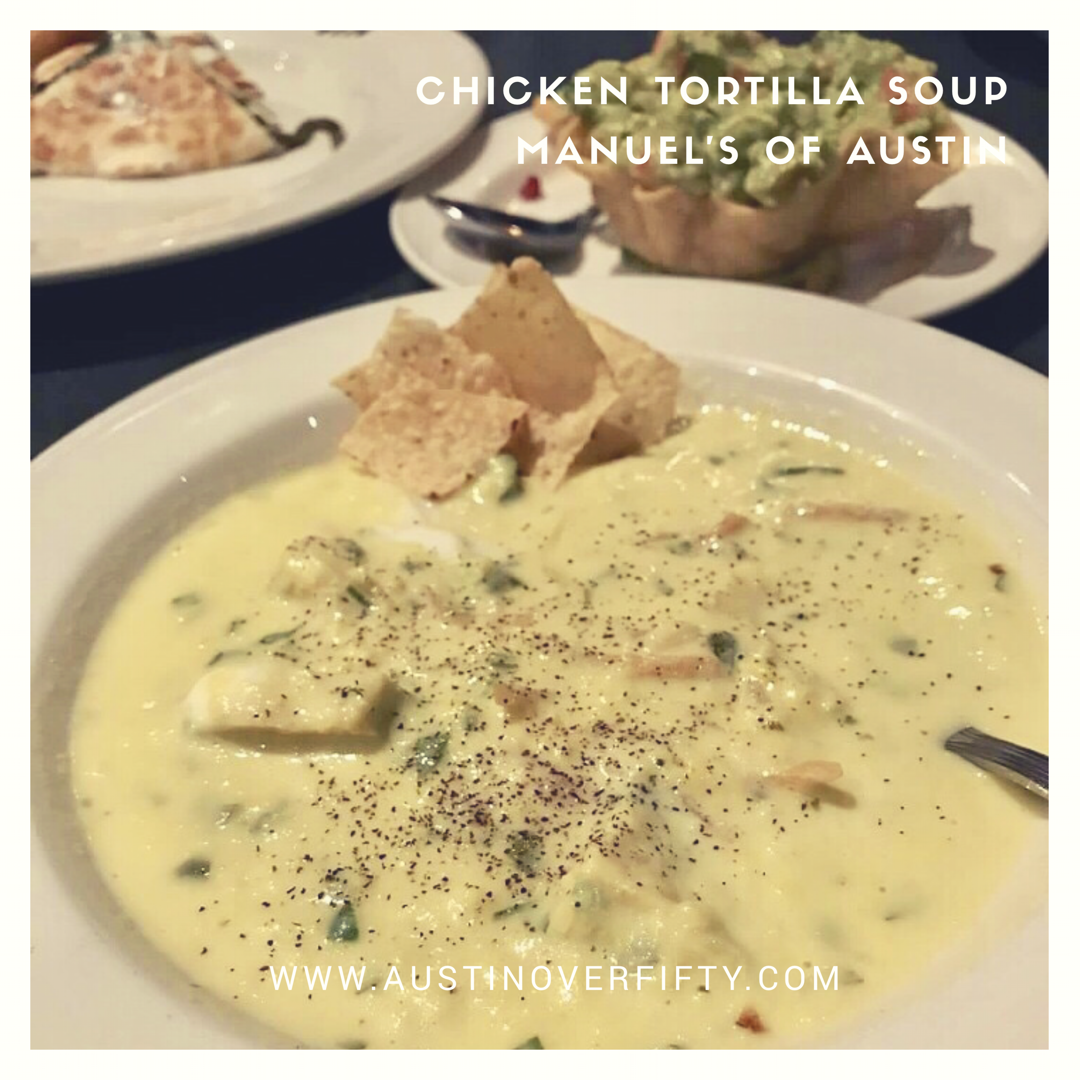 Paul Martin’s at the Domain Northside is going to be a big hit in Austin. It’s got a decidedly Californian flair, a fabulous corner location, a great menu, and a fun atmosphere. The night we were there, I met a big group of 50 something’s from Georgetown who come there every Tuesday night for happy hour. It’s a great place for groups, but also offers intimate window booth seating for couples. Then again, we also saw a large family seated around a big round table with balloons and high chairs. Let’s just say, no matter the occasion, they’ve got you covered at Paul Martin’s. This French onion soup tasted magnificent after an evening of Christmas shopping at the Domain, but it would also be good after, well, any shopping at the Domain. 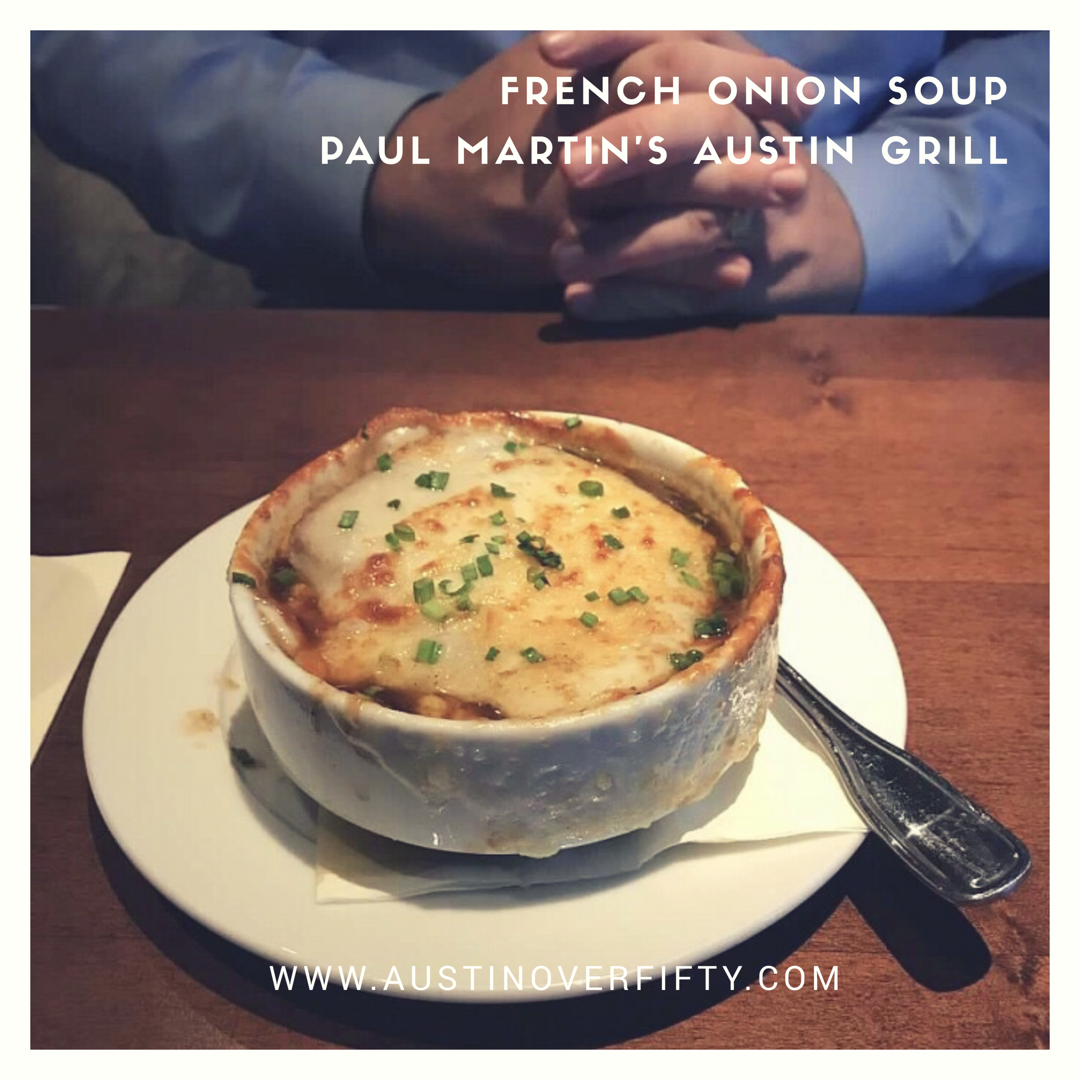 Wu Chow is one of those places Austin newbies hear about early on. Have you been to Wu Chow? That’s what those-who-know-stuff ask those-who-don’t, and there’s good reason why. Everything, absolutely everything at Wu Chow is so very good, but if you’re looking for an amazing Asian soup, you won’t find better than this one. I consider this sweet corn and egg ribbon soup to be the best Asian soup ever, and a true find; however, at only $2 a bowl, it’s really more of a steal. 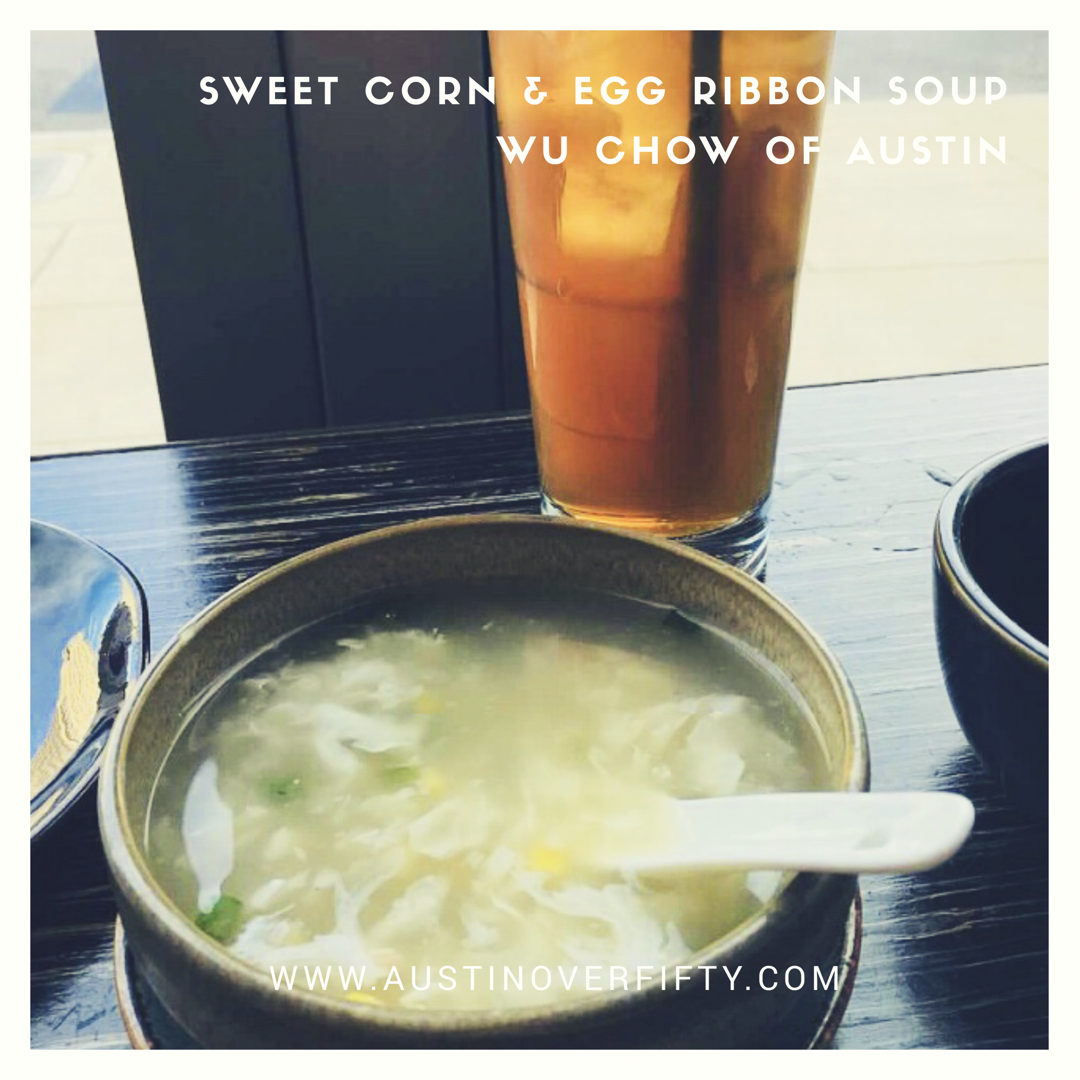 If you work downtown like I do, there are plenty of great lunch choices, but if you work downtown, it’s cold outside, and you just need a little cup of soup to enjoy at your desk, try the soup of the day from Barley Bean. Small portion cups at $3 each are budget-friendly, too, but if you’re a little on the hungrier side, they also have pizza, sandwiches, wraps and smoothies. With six locations around Austin, there’s bound to be a Barley Bean near you. 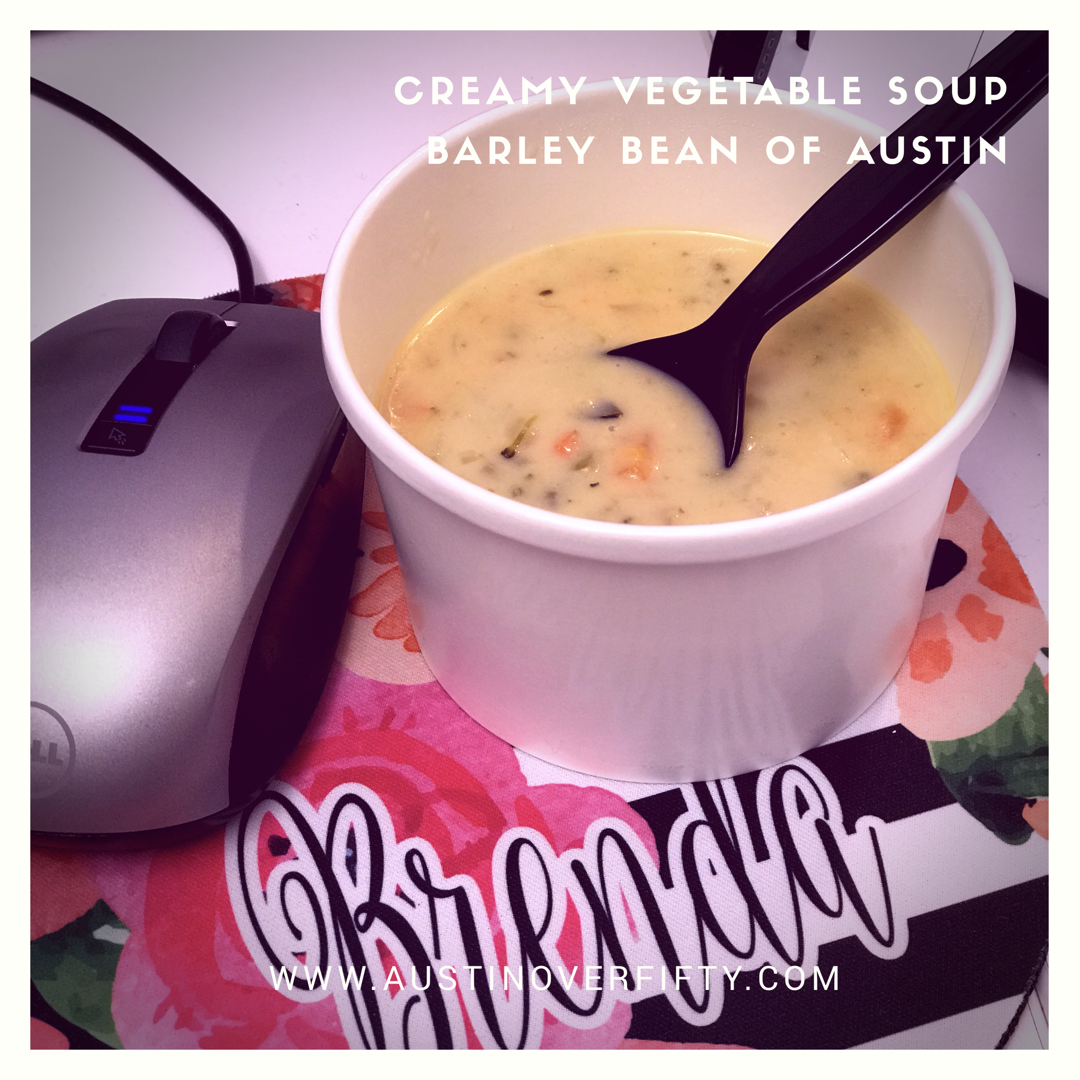 No discussion of soup would be complete without including the star of the soup stage – clam chowder. Thanks to Clark’s Oyster Bar, no Austinite need ever go all the way to Boston to get it, either. Oh, I love this bowl of creamy clam chowder. It comes to the table in a little nautical-style crock, with little round crackers, served by someone in a white apron who speaks softly and appears just often enough to refill your tall glass of glistening ice water. And then there’s the wedge salad on the side, with bacon and blue cheese crumbles. For the Nor’Easterner in us all, Clark’s has perfected the recipe right here in ATX. Get yours at brunch this Sunday. 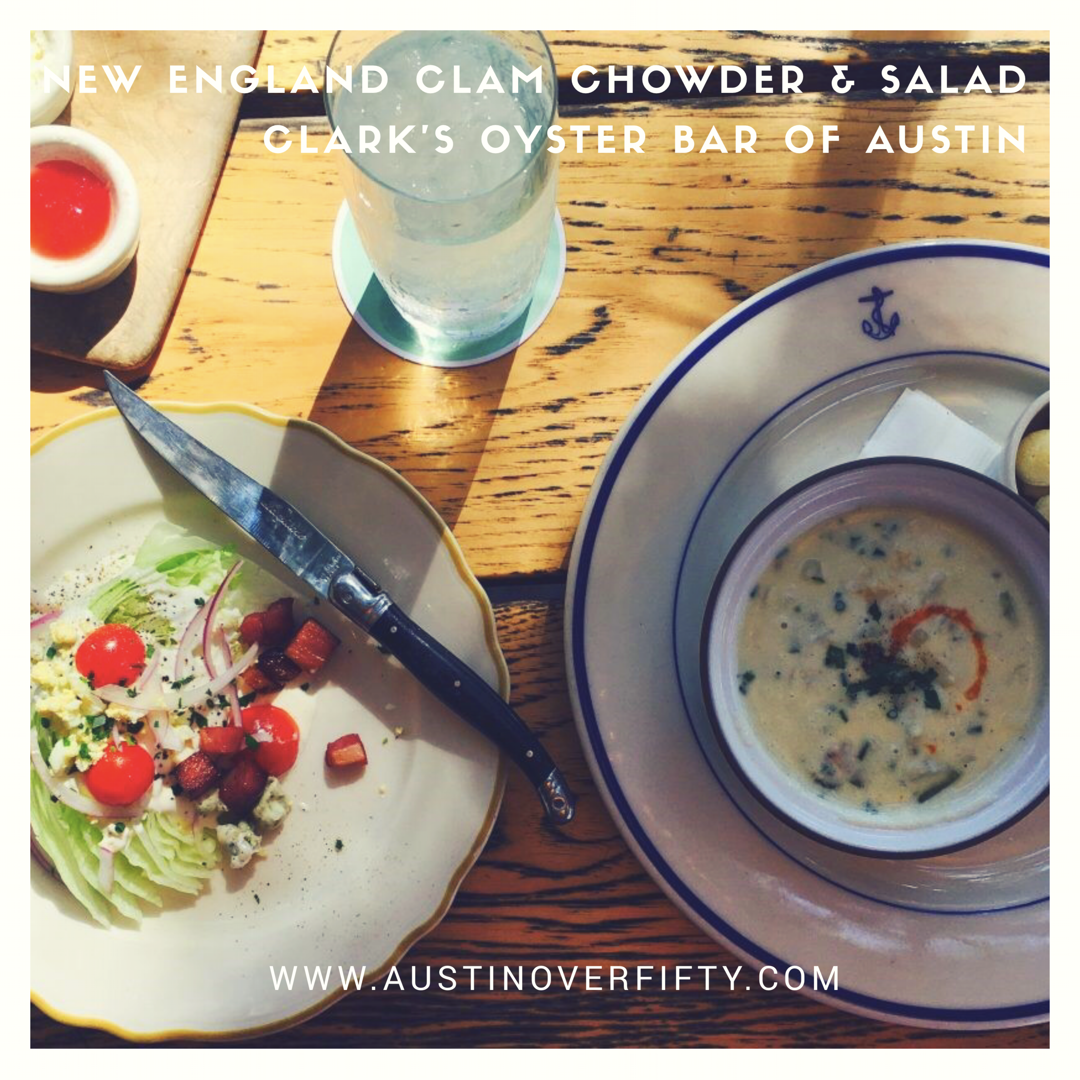 Well, my friend, I’m so glad we’ve celebrated National Soup Month together. Let’s do this again next year, okay? We’ll put on our boots, wrap ourselves in warm woolen shawls and find a sturdy wooden table for two where we can discuss a whole new list of soup choices. Oh, there will be a list. Because one thing’s for sure – Austin’s Got Soup – and we’re just the friends to find it.

Encouraging intentional adventure, one soup bowl after another,

PS – Be sure to sign up to receive my email newsletter! 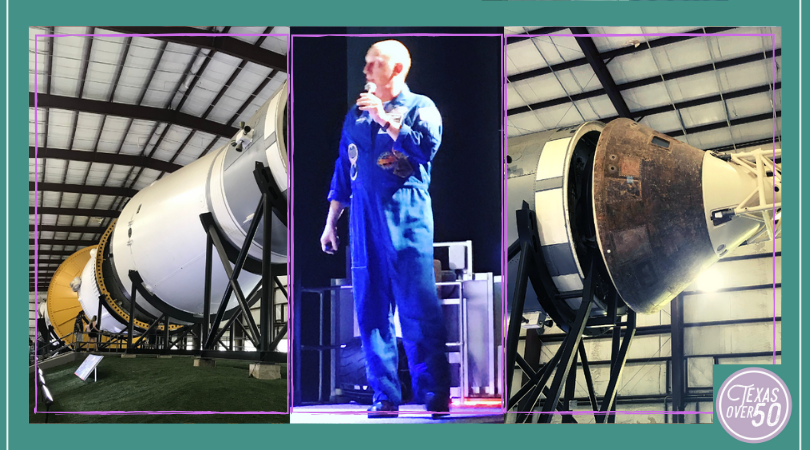 Visit NASA During the 50th Anniversary of the First Moon Landing 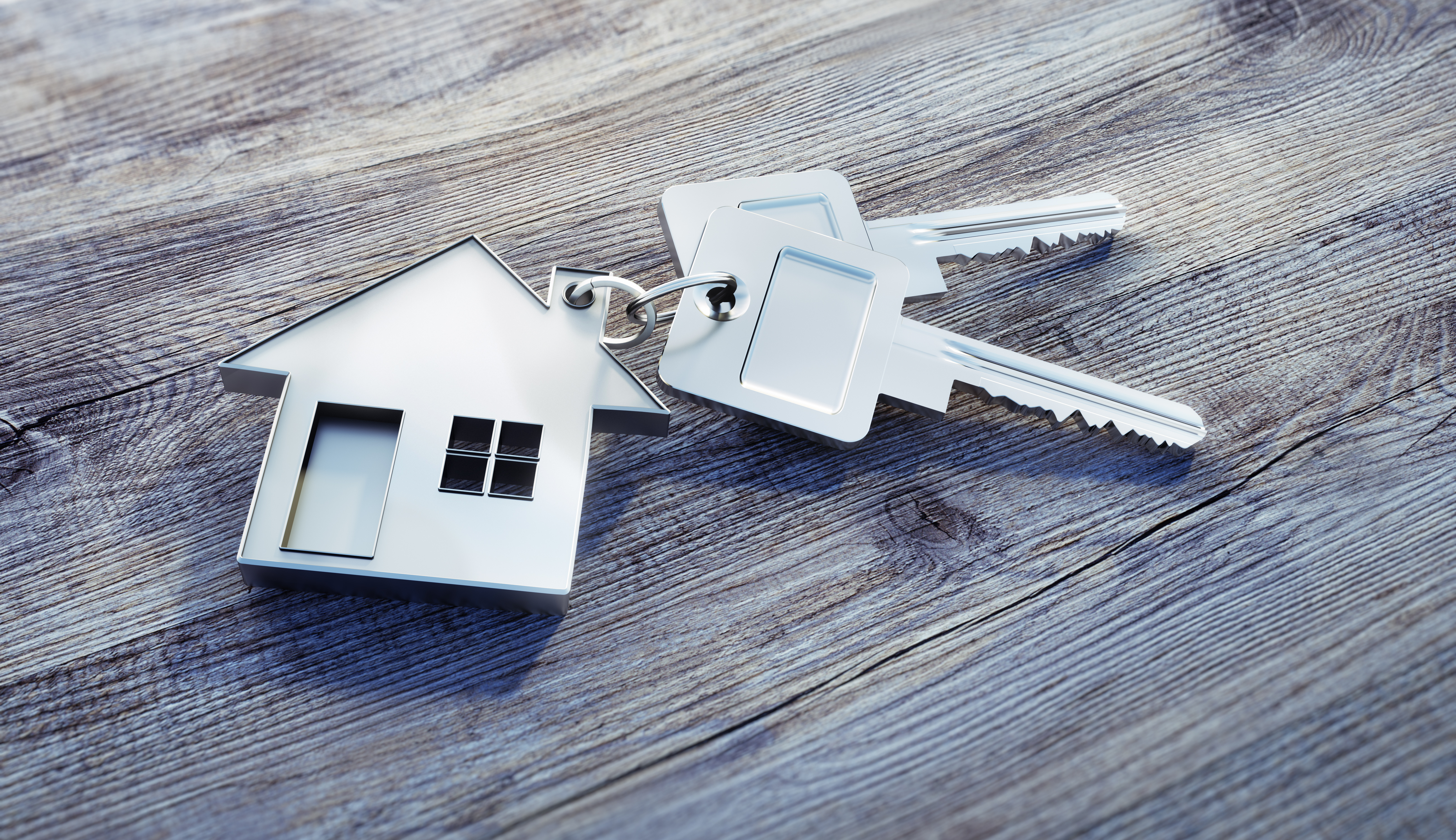 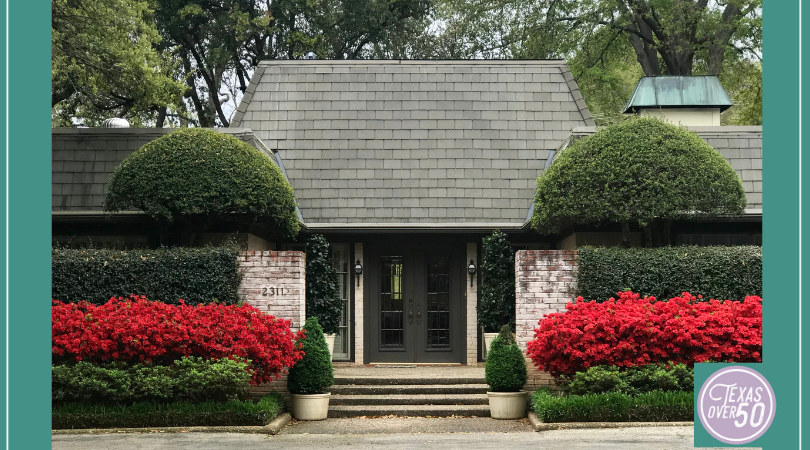 Make Plans Now to See the Azaleas in Tyler Next Spring